I graduated from Syracuse University in 1996 with a Degree in Fine Arts. I took my first photo class in London, 1995 and have been hooked ever since. When in London I even managed to get the teacher to give me an extra set of key to the darkroom so I could work at night. Since then I have been working mostly in medium and large format film and alternative methods.

I live in and work in New York City but I like to travel and have visited places like London, Athens, Florence, Rome, Bologna and Madrid. Recently I lived and work in Argentina for two years working on a few projects.

Here in New York I participated in the Vague Terrain: Manhattanville, a group show about Manhattanville and the changing of the community by Colombia University at The City College of New York.

The my most recent show was a group show about that dealt with the economy, also shown at The City College on New York.

The MTA recently has chosen one of my photos: "Cold Fingers Reach Into The Night Air" along with four other people to represent artists from Washington Heights and Inwood. For two months they are hanging them in the subways.

My photo, "Highbridge Tower 3" was recently published in SHOTS Magazine Issue #108. An independent, reader-supported, quarterly journal of fine art photography in its 23rd year of publication.

Most of my work is centered around urban development and it's impact on the people who live there. About the disappearing neighborhoods and void that is often left. I use my camera to evoke feelings of what the lost and forgotten places used to be like. The idea that not every area has to be full and productive. That some places are more free and grow in a unique way outside of the confines of modern urban society. 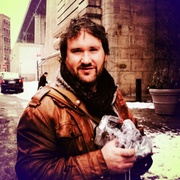